Controlling an Arduino from an Android Phone or Tablet

Question: What do you get when you connect your Android Phone or Tablet with a USB-OTG cable and connect that into another USB cable connected to an Arduino? 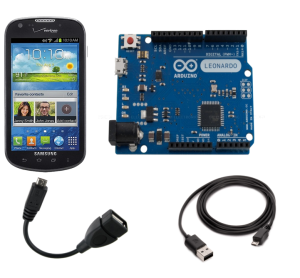 Connect an Android Device to an Arduino

There are a number of Android apps that were created for both Electronics  and MicroControllers such as the PICs and Arduinos.

These apps are quite handy when you are ‘in the field’ and working on a project.  Note: the Arduino DUE has a USB host port, so you can plug your android phone or tablet directly into it, however the above mentioned apps only support the older IDE, they do not support the DUE.