Controlling an Arduino from an Android Phone or Tablet

I recently acquired a Nuqleo Zinc 7 Android Tablet. It looks like this: 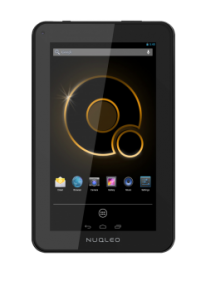 I couldn’t resist 🙄 as it was such a good price. It comes with an OTG cable and works great to attach and host your Arduino(s).  Also, a tablet such as this one makes apps easier to use (i.e. to see) as a tablet has a larger screen area versus a phone.

In a previous article (HERE) I mention some useful Android apps to interface with your Arduino(s). There are also a number of things (i.e. commands / programs) that can be run from the command line if your Android device is ‘rooted‘. Being a Linux user from way way back, I like the flexibility to see what is going on and run various commands that are part of BusyBox. BusyBox combines tiny versions of many common UNIX/Linux utilities into a single small executable.

There are many methods (programs and scripts) around which take advantage of exploits to gain root (or super user) privileges. Some require your Android device to be hooked up via USB to another computer running Windows. Others (much simpler) are apps (apk files) which run directly on your android device.

Fortunately I found an apk that rooted my Zinq 7 quite easily called Baidu Root. I installed it and then installed the SuperSU apk to grant access rights to other programs and  Shell Terminal Emulator to access the command line. If you want an updated version of BusyBox, I suggest installing this BusyBox apk.