Automated AP-List Scanner for the ESP8266

PCDuino Lite – An Arduino with more Power and Flexibility!

For certain Arduino like projects, you might need more CPU power or the flexibility of running Linux ‘on board’. Besides the Arduino Galileo you might consider another device outside the Arduino family, something like the PCDuino from LinkSprite.

I recently experimented with a PCDuino Lite which has 512 MB DRAM, a 1GHz ARM Cortex A8 CPU and a Mali 400 core GPU. It also has HDMI video out, a RJ45 Ethernet connector, two USB ports  and a microSD card slot for loading Linux (Ubuntu 12.04). There are also two microUSB ports (one is OTG and the other is just for power).  It looks like this:

You can access the following interfaces,  UART, ADC, PWM, GPIO, I2C, SPI with programs written in C or Python. Here is a graphic of the pins: 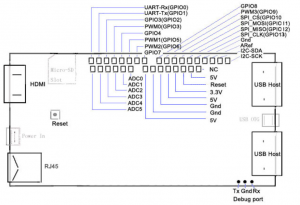 I had several problems once I 1st got Ubuntu (Linux) up and running. Those problems and solutions are well documented here. Additionally I had to use a Class 10 (UH1) microSD card as any lesser class would not boot.  To get access to the GPIO pins, I had to run:

to load the GPIO module. This creates the files associated with the pin and the pin mode. Sparkfun.com has a good tutorial on getting started with the PCDuino and one on programming it.